IS YOUR GAS EQUIPMENT SAFE?.

South Africa once had the best safety record in industrial gas equipment but adherence to standards have declined over the last decade primarily due to the reduced policing of the SABS and allowing large-scale imports of low quality and non-compliant gas equipment by distributors. Most such imported products claim to meet standards such as ISO 2503:1998 when the products clearly do not meet the standard as laid out by SANS 10238.

Gas safety training competency has also declined over the last decade as industry specialists retire or emigrate with the exception of a handful of gas safety specialists. This article covers some of the more prevalent dangers associated with gas equipment with a particular focus on acetylene regulators. It will provide customers and users with a quick checklist to assess whether their acetylene regulators are safe and compliant to SANS 10238.

In view of the above, we strongly recommend that only trained operators may use gas equipment.

(The following are typical safety risks with acetylene regulators.)

Manufacturing standards require that the pressure gauges should be torqued to the correct level that will ensure that these remain tight during normal operation. Poor manufacturing control means that the gauges become loose during normal use resulting in gas leaks. Leaking acetylene gases create an explosion hazard which can result in serious injury. In most cases the leaking gases will catch alight and the hazard can be contained by dousing the flame with an extinguisher and quickly shutting the acetylene cylinder valve closed. It is good practice to conduct regular (at worst weekly, at best daily) gas leak tests using the correct leak test procedures.

An abnormal occurrence of leaking gauges would imply a significant batch manufacturing problem and the manufacturer and/or the distributor should immediately initiate a full product recall.

Gauges are normally leak tested during the manufacturing processes. Poor soldering on the bourdon tubes may cause the soldered joint to fail after a period of use resulting in a gas leak. The correct daily leak test would reveal such leaks and prevent an incident. The leak is normally minor and a fire can be contained in the same manner as above. Manufacturers would normally recall suspect batches and retrofit the pressure gauges.

Manufacturing standards require that the bonnet be torqued to the required level. A flat fibre slip ring is fitted between the diaphragm and the bonnet to ensure that the diaphragm stays in place as the bonnet is tightened. Poor quality rings or poor assembly processes result in the diaphragm twisting and ending up off-centre. The leak may not be detected during the final production inspection but the diaphragm may move after some time in use on a customer site and result in an acetylene gas leak. This creates an explosion hazard. The hazard can be contained by extinguishing the flame and shutting the cylinder valve. The extent of such a fire is generally far more dangerous than a leaking gauge fire and hence a far more serious hazard. Immediately isolate the regulator and the equipment and notify the manufacturer and/or distributor. The use of inferior diaphragm material by the manufacturer may result in the material rapturing during operation, creating the same acetylene fire hazard.

An abnormal occurrence of acetylene gas leaking from the bonnet would imply a significant batch manufacturing problem and the manufacturer and/or the distributor should immediately initiate a full product recall.

Acetylene is an unstable gas and is therefore stored in a gas cylinder in acetone which in turn is dispersed in a fine porous mass (DA stands for ‘dissolved acetylene’). This ensures that the volume of gaseous (free) acetylene remains small, thus reducing the risk of decomposition. Acetylene in gaseous form can violently react spontaneously (an exothermic reaction) without a source of ignition. For this reason, international standards demand that (free) acetylene gas should not be pressurised above 150KPa (up to an internal pipe diameter of maximum 50mm hose or pipe). The maximum outlet pressure that an acetylene regulator should deliver shall not exceed 150KPa and this limit is set during the manufacturing process. For most regulators, the pressure range above 150KPa is clearly marked in red.

Should the outlet pressure exceed 150KPa, there is a significant risk that the acetylene in the delivery side of the regulator and the gas in the hose can spontaneously decompose resulting in a serious explosion. Any personnel close to the equipment could suffer serious injury, even death. Even worse, the shock generated by the explosion could trigger spontaneous decomposition within the acetylene cylinder resulting in the cylinder bursting and exploding with disastrous consequences.

If an acetylene regulator delivers more than 150KPa outlet pressure, the higher flowrate may directly affect the maximum withdrawal rate of acetylene from the cylinder and impact the integrity of the acetylene cylinder. The higher gas flow draws the acetone out of the cylinder reducing the volume of acetone available to dissolve the acetylene.   This destabilises the delicate balance of acetone to acetylene ratio in the cylinder which could potentially result in spontaneous decomposition.

Users of gas and equipment should therefore inspect all their acetylene regulators and conduct the following quick safety test:

The incidence of high outlet pressure is extremely serious due to the catastrophic life-threatening consequences and manufacturers and/or distributors should immediately recall all suspect batches of acetylene regulators. Some would argue that one such faulty regulator is one too many. Failure rates greater than 0.2% would require definitive responses by the manufacturer and/or distributor of the product. Customer should remove all regulators of the affected brand of regulator and notify the supplier. 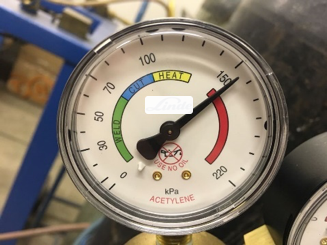 Gas equipment should be inspected on a regular basis and such full inspection will be discussed in a separate article. Users of gas equipment should conduct a comprehensive leak test on gas regulators on a daily basis as follows:

Shut the valves on the torch; disengage the regulator pressure; Open the cylinder valve slowly; Set the delivery pressure of the acetylene regulator to maximum and note the setting; Close the cylinder valve and leave for a few minutes.  The high pressure gauge pressure should remain constant and any drop in pressure would indicate a leak in the system which should be investigated and fixed. 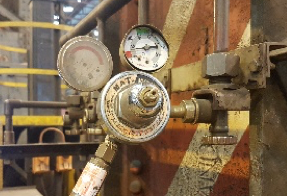 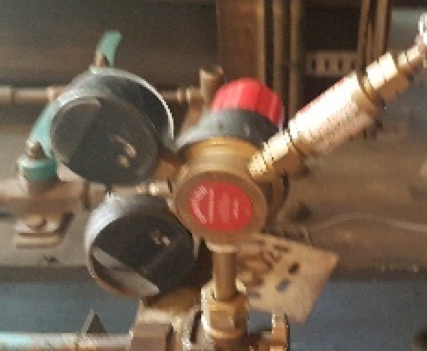 South Africa adopted the European standard although there is no legal requirement for South African companies to comply with the standard nor is there any government or third-party enforcement. Companies with a strong safety ethic generally require that its gas equipment complies to the ISO (SANS) 2503 standard. Regulators that carry the ISO 2503 mark are not necessarily safe or provide the company’s employees with the required protection. Many suppliers, namely East Asian companies, will print the ISO2503 standard on its boxes even if the product clearly does not meet the specification. The following section is a quick guide to assess whether a product complies and possible remedial action:

ISO 2503 is European-centric and other countries have equally safe standards such as USA (UL listing), Japan (JIS), Australia (AS4267).

The ISO2503 standard is complex and full compliance testing will require expensive and sophisticated laboratory equipment not available to companies but some simple visual inspection tests can be conducted that will indicate whether the product complies.

The standard states that the PA knob must be captive. A removable pressure adjusting knob would be an immediate non-compliance, and the regulator would not be able to claim ISO2503.

Quick test: Unscrew the PA knob on a regulator. If it can be removed, the regulator does not comply. 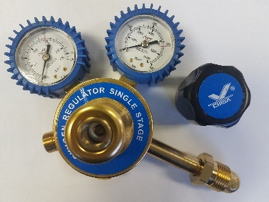 The standard clearly states that the regulator shall be set such that the delivery pressure cannot exceed 150KPa during operation. Thus, any acetylene regulator that exceeds this requirement cannot claim to meet the standard. The regulator pictured on the right would not comply to the standard.

The ISO2503 standard requires that the pressure gauges comply to ISO 5171. It is very difficult for a company to verify that the gauges meet the standard but a visual inspection could indicate non-compliance. The ISO 5171  standard replaced the old EN 562 standard and many manufacturers still print EN 562 on the gauges. This is a clear indication that the pressure gauge and the regulator do not comply to the standard. 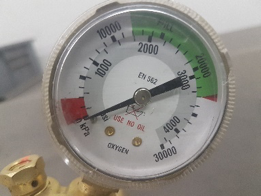 The ISO 5171 standard requires that the gauges are clearly marked as follows:

The pictured pressure gauge does not have the standard, namely ISO 5171:2009 printed on the gauge face, and hence the gauge and consequently the entire regulator, does not meet the standard. It could be argued that the simple omission of the printing does not make the regulator unsafe but, if a manufacturer is not able to comply with this simple requirement, it raises questions over the more technical compliance issues.

Some manufacturers are able to meet all the standards with the exception of the Oxygen Ignition test. There are only two European testing agencies that can conduct this test and the cost is prohibitive. Thus, manufacturers would claim that the regulator is “Type Tested” which means that it means all the requirements without the external validation of the oxygen ignition test. This is a very honest representation of the product and should be preferred over a product that misrepresents itself as being fully compliant.

There are three flammable gas regulators in regular use namely, acetylene, hydrogen and LPG. The problem is that using the wrong regulator may result in injury to the user.

Fitting the incorrect regulator to an acetylene application:

Fitting the incorrect regulator to an LPG application:

Fitting the incorrect regulator to an Hydrogen application:

Leaking acetylene regulators present a significant fire and explosion hazard and users should conduct regulator leak tests on equipment in use.

The delivery pressure of an acetylene regulator should never exceed 150KPa as this increases the risk of acetylene decomposition. Users should inspect all acetylene regulators, especially on first use. Faulty regulators should be reported to the manufacturer or its distributor which would necessitate full product recall if the occurrence is above an acceptable level.

Many regulators on the market claim to comply to ISO 2503 and, whilst a full compliance test is very difficult, a few easy visual tests can be conducted to test compliance. Failure of any of these tests would render the regulator non-compliant and the supplier distrusted. Suppliers that knowingly sell regulators that incorrectly claim compliance to a standard may expose itself to claims whilst end-users may be in breach of health and safety regulations.

About the author: Nazmi Adams, a chemical engineer, has over 25 years of experience in gas equipment was led the development and introduction of the Afrox/BOC Series 6000, S8000 and S9500 regulator ranges and its exports into Australia and the UK. He was the Global Head for Industrial Products for the BOC Group and the Linde Group in the UK and the Global Marketing Director for ESAB Holdings. He is currently the CEO for Weldamax, a Sanlam Private Equity company.

Disclaimer: The above article is not intended to be a comprehensive guide to gas equipment safety as the topic is far more extensive. Users are advised to consult their own internal guidelines on the use of safety equipment and adhere to the user instructions published by the manufacturer of the equipment. The data quoted in the article relates to South Africa and may not be applicable to other countries. Pressures quoted may also vary amongst gas and equipment suppliers.